The Work itself in collaboration with “Moi Aussi…”, seen as an invitation to awaken within the consciousness of the viewer, in direct use as a utilitarian element of vision, calls for a better objective of observation from the physical world in which we’re in; However, in its conceptual and artistic context, they are an astonishing element as they open the doors to a different perception of the dreamed reality and allows one to enter the world of reality or the dream, while being unconsciously awake in them.

A lucid dream is one in which one is reasonably aware of dreaming while we are submerged in a gradual mental rest, this ability has been present in the main creative line of my artistic career.

One of the most important practices in the direct immersion of these conscious dreams is the reasoning of the reality tests, which consists of questioning the “lived” reality several times during the day so that this questioning becomes a habit in the world of the vigil; thus while we are asleep and our mind is at rest, we question reality and transform the dream into normality, into a lucid dream over which we will have total control and dominance.

These lenses cleverly transformed into a Work of art, are fundamentally charged with mysticism, ancient but relatively modern; they hide within themselves under the golden and aged color of the ancient gods, a design inspired by the pre-Columbian culture of Colombia, my country of origin.

The intervention that they carry is found in its own language which has been developing in my plastic work within recent years, they are the union between my name Johnny López and the Hieroglyphic writing used by the ancient Egyptians; Hence I call them Johnnyglifics; in them I normally use words, signs, phrases and all kinds of symbols of all religions, intellectual, doctrinal, esoteric, spiritual and cultural currents of the world.

They are conclusively a direct and archaeological allusion in the light of modernity, loaded with words and phrases in different languages ​​such as: “dreaming???”, “…sto sognando???” and “ZZZ”, which constantly question the reality of the viewer to which I referred to earlier, leading them to the possibility of living and experiencing for themselves, the magic of these lenses, thus awakening in the dream world. 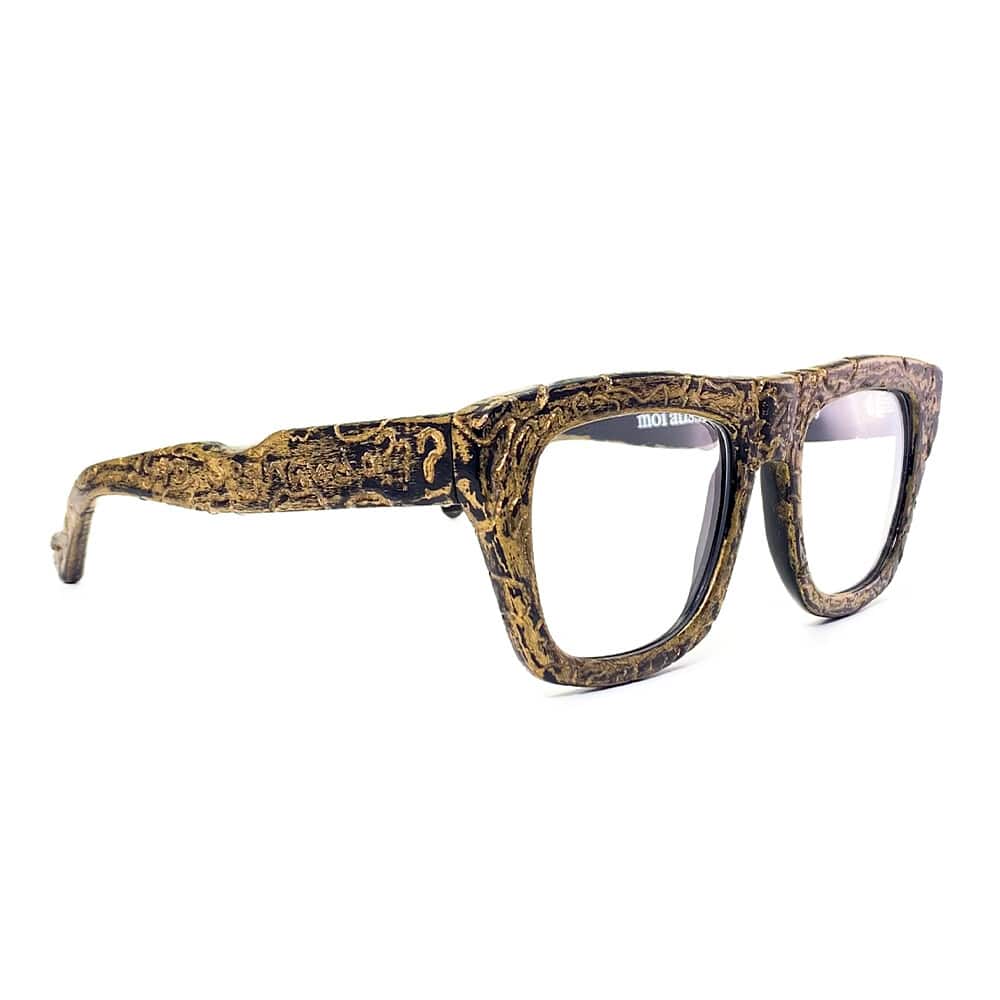 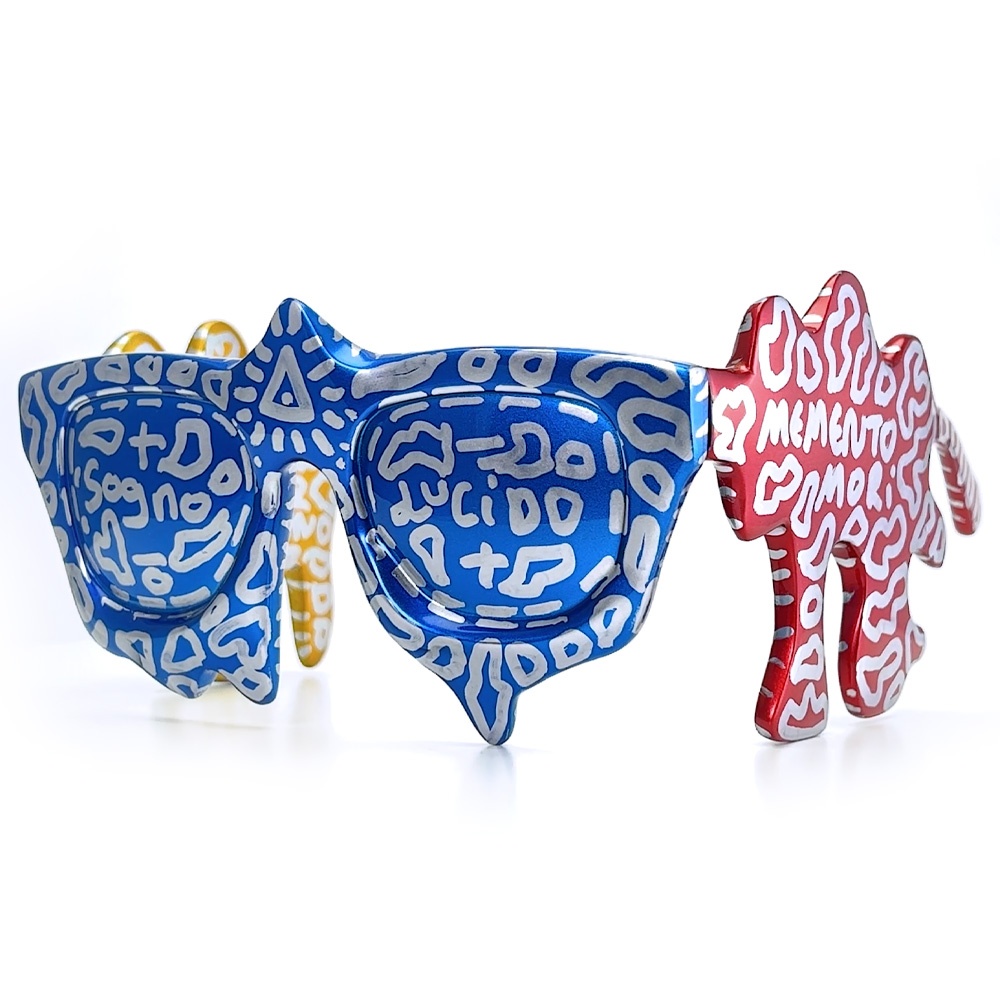 The Colombian artist Juan Felipe López Hernández with the stage name “Johnny López“, from an early age was characterized by his active imagination and his candid application in constant drawing. After graduating from his primary and high school studies, he began his training in business administration and international business in the city of Bogotá.

It was in 2010 on a visit to Europe, that during his visit to the Louvre Museum, inspired by contemplating “The Mona Lisa” by Leonardo Da Vinci, he remembered and rediscovered his love for Art. In 2011 he began his artistic career studying in the city of Barcelona (Spain) first, at the “Cercle Artistic de Sant Lluc” under the tutelage of Master Josep Maria Cavane, later taking free courses in drawing and graphic design at the “Escola Massana” . In this same year he comes into contact with his dream side and connects with the world of lucid dreams, it is through this amazing path that in a retreat in the Sierra Norte de Madrid he meets and establishes a connection with the Valencian Master of drawing Joan Castejon, who later invited him to his home and studio in the city of Denia in the Valencian community, creating a great and beautiful friendship between the two artists. In 2012, he moved to the city of Florence (Italy), where he deepened his knowledge of fine arts under the tutelage of various masters such as Giovanni Tommasi Ferroni, Rossana Pinero and Gregory Burney among others at the renowned “Istituto Lorenzo de ‘Medici’, where he becomes acquainted with the amazing Art of the Renaissance. In 2015 he graduated in fine arts at the Florence headquarters of the American University “Marist College” in New York (USA). In 2016 trying to follow in the footsteps of Maestro Fernando Botero, he was accepted as an official copyist at the Louvre Museum in Paris (France), coming into contact with the main classical artists exhibited there and with the visiting public. Today his greatest inspiration comes when he closes his eyes and dreams lucidly, it is in this magical world where he begins the gestation of his projects and his work. Currently he concentrates his work on paying tribute to the pre-Columbian cultures of his country Colombia, uniting the ancestral with the contemporary, the material world with the dream world. “Johnny López” is a multifaceted artist, he works with various artistic expressions such as sculpture, painting, painting-culture, installation, drawing, muralism, among others. He currently resides and has his studio in the city of Bogotá, Colombia, from where he frequently travels to New York, Miami, Los Angeles, Barcelona and Tokyo.