Helmut Pizzinini looks for zero and reaches zero. Zero is the perfect point, it is the point where everything is born, the center of the Earth.
Noble materials, such as gold and silver, have been buried under a blanket of ultramarine powder, which illuminates and seals the magic of the Universe.
The symbols that govern the laws of life have been engraved in this work as they are in our most intimate and profound unconscious.
Starting from the base, we make a tree bloom again. 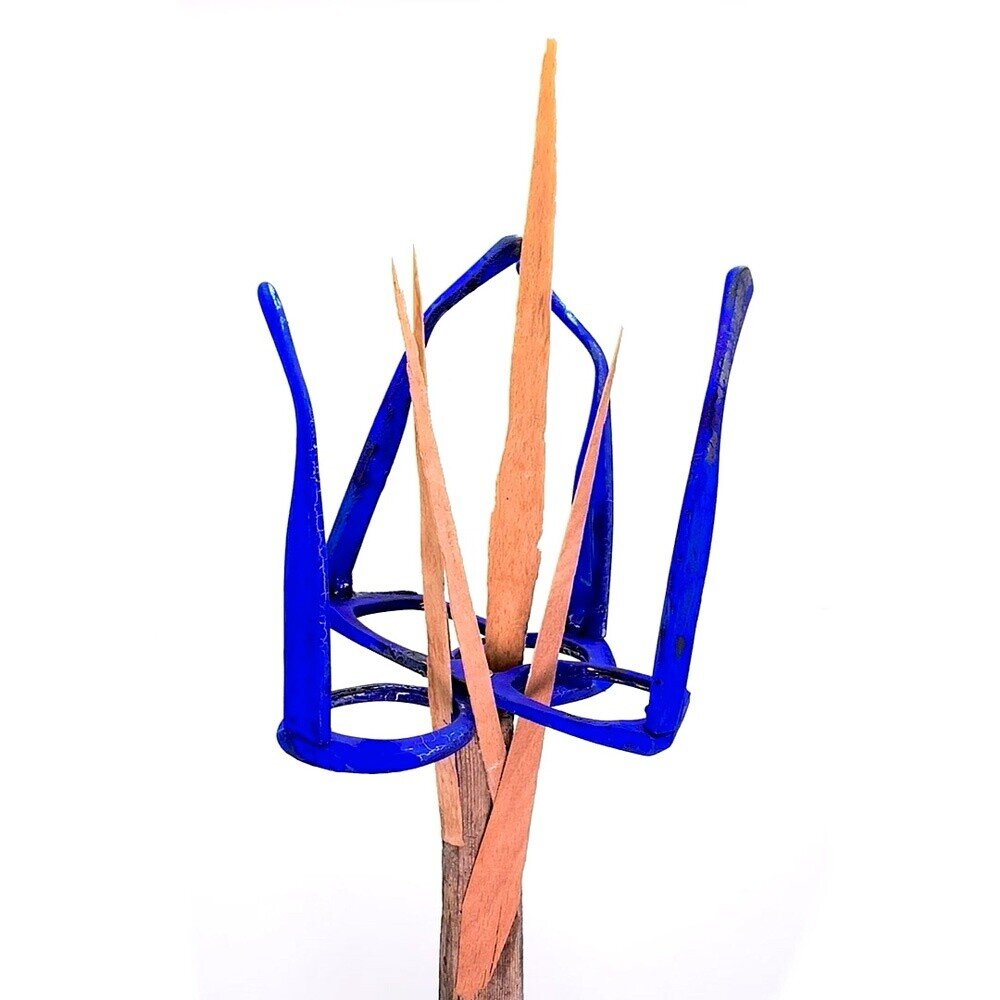 Helmut Pizzinini is an Italian sculptor, born in 1961 in Val Badia (Dolomites) where he currently lives and works. Proudly self-taught artist, his artistic research is aimed at identifying the static and dynamic balance of forms, experimented on various materials. Helmut Pizzinini has embraced a minimalist style by combining the essentiality of the materials with an elegance that expresses refinement, sensitivity and intimacy. While showing a predilection for wood compositions, he often creates works in metal and marble, the material of which he has deepened the working technique in the Carrara quarries, producing 20 sculptures in over 2 years of work.

His works are widespread throughout Europe, where he has collaborated with various art galleries and has exhibited in various public institutions including Palazzo Strozzi and Villa Romana in Florence (Residency Award), Museion in Bolzano, and Mart in Trento. When living in Germany, he designed a stamp commissioned by the German Federal Post Office and in 1991 he won the artistic collaboration on the architectural project of the Bad Canstatt Thermal Bath in Stuttgart, to which he designed fifteen fountains, including one commissioned by Mercedez Benz. He also designed a fountain for the municipality of Levico (Trento). In 1995, at the invitation of Achim Kubinski, he participated in a parallel event at the Venice Biennale of Contemporary Art, and in 1999 he made the cast iron ox for the Dutch Cultural Institute in Florence. He has followed various projects including the construction of an Italian garden for a private villa on Lake Zurich and of a small church at 2500 meters in the Fanes Natural Park (Dolomites).
In 2004 he contributed with Peter Zadek, on the scenography of ”The Jew of Malta‘’, at the Burgtheater in Vienna. In 2008 he won the competition for the construction of a fountain for the Municipality of Levico (TN).
He collaborated with the Weissenhof-Siedlung of Stuttgart and collaborated with several architecture and design studios in Italy and abroad, including that of the German engineer Frei Otto, the architects Artengo-Menis-Pastrana and the Italian Claudio Nardi.
In 2013 he participated in the ”Exstase” exhibition, for the bicentenary of Wagner’s death, organized by Paulus Manker and Peter Bogner, at the Börse in Vienna. In 2012 he created a series of multiples of bronze castings for Esart Fonderie of Brescia and an exclusive series for Diners Club. Since 2016 he has collaborated with the sportswear company Salewa, for which he signs the awards given to the best retailers every year. The artist is also a member of the Ladin artistic circle ‘’EPL’’, with whom he recently exposed at the Messner Mountain Museum Ripa in Brunico.
The art critic Danilo Eccher defined him as an art philosopher with an indispensable, fantastic and transcendent fantasy, which detaches itself from the surrounding reality to approach the purity of infinity. According to Eccher, Helmut Pizzinini’s art has extraordinary strength, an expressive charge of surprising vitality and an artistic quality of profound sensitivity.
The artist deals also with the interior design of private houses and luxury hotels. Amongst the various wine-cellars he designed, the Sassicaia Wine Cellar of the Hotel La Perla in Corvara has been awarded in 2006 as one of the most beautiful in Italy.