Minima Lumina/Sound object and vision prosthesis
The device I developed for Moi Aussi project stems from a series of reflections made in 2019 on the current socio-political context of Colombia. The context still does not change.

Minima Lumina
There is a latent ambiguity in the socio-political processes that have developed in recent years in Colombia. The peace process, constantly hindered by right-wing parties and conservatives, the departure of the guerrillas from the mountains and the handing over of arms, constitute, at the same time, the road towards an imbalance in the conservation of some natural ecosystems and the degradation of biodiversity that previously it was somehow protected from the presence of these illegal groups. The neglect and inability of the central government to protect our natural resources and the biodiversity of our territory, has left the natural wealth of our country in the hands of illegal exploiters and ambitious landowners who unscrupulously seek to seize immense territories for cattle breeding and mining. The situation of political and social instability has reached a turning point, exacerbated by the unbridled slaughter of social leaders, defenders of our territories and resources, defenders of human rights. In this situation, a force was born that resists, that criticizes the government, that rejects corrupt politics and that fights for the fundamental rights of life and for the protection of our natural resources. It is a new generation of aware young people, activists and non-activists, mostly students; a great growing resistance of “little lights”, as Pier Paolo Pasolini would call them, ready to give their lives for a better Colombia. Minima Lumina is a long-term project that seeks to generate works that allow us to reflect on this crucial historical moment in Colombia and take a stand, on the side of the light, on the side of the small lights that fight against the dark forces of corrupt and fascist politics of our country.
The artwork
The device I developed for Moi Aussi project somehow suggests the phenomenon called Synesthesia, through which the perception of one sense is somehow connected to another. In the case of this work, one sense is connected to the other and at the same time the first acts as a prosthesis to the second. In a country where “turning a blind eye / acting stupid” becomes a common pathology that determines the malfunctioning of political and economic dynamics; where the faculty of seeing, sick, so insufficient, and limited, needs to be replaced or, at best, assisted by another sense, this other one comes to replace, to reconstitute the function of “connection” of the vision with reality, with the truth. After almost 80 years of violence in Colombia, of excessive saturation of images of death, the sense of sight is exhausted, atrophied, sick, also affected by the construction of the historical memory to which it is closely linked.
To somehow alleviate the loss of historical memory, which allows us to review the past, transform the present and imagine a better future for our country, I wanted to create a device that could act as a prosthesis for vision. This device is designed to use sound and listening as a vehicle for memory repair. In the sound we find the voices of the victims of violence, the voice of social leaders, of social protests, the noise of state violence, the abuse of the police, the pain of those who mourn their dead.
The device consists of a low tech adaptation to two pairs of glasses. The ability of glasses to improve, to increase vision is replaced by a sound prosthesis. A system that allows you to reproduce the sounds, voices, sound archives taken from the current social protest that broke out in 2019, as a reaction to the injustices, repression and corrupt and senseless policies of the current government. The sounds reflect the discontent of a Colombian people tired of the corruption, oblivion and indifference of the political class. These are the testimonies of the street, of people protesting against a fascist state, against the excessive use of violence by the army and the police, which has constantly violated human rights and limited the legitimate right to social protest. The device plays continuously and without pauses, files recorded by various media, between April and May 2021, during the national strike and the protests of various regions and cities of the country. The device reproduces the clamor of a people seeking radical change and an end to the violence of more than 900 social leaders since 2016 (More than 80 in 2021 alone), most of whom went unpunished. The system reproduces the voices, songs, shots, bombs, tears and anguish experienced by people during these protests.
The sound is not a clear and limpid sound, but it is acute, cutting, fragmented like the pain itself that wants to manifest itself, but trapped in front of the glass of the glasses. The glasses, although transparent, do not let sound pass, they do not let it flow or spread freely. Glasses are at the same time a metaphor for the media, which, when manipulated, act as filters of truth, deforming it, diverting it and transforming it into a political tool. With a few exceptions, it appears that the entire media system is designed not to inform, but rather so that the truth never comes out.
So, to listen, the viewer must be more attentive, get a little closer to the device, not be the typical unsuspecting tourist, but rather the active, participating spectator. Approaching, the user will hear a mass of sound from which cries of anguish, songs, hymns, the expression of a people who want to be heard arise.

In Minima Lumina, the glasses / sound objects act as a “shield-mirror that saves Perseus from the deadly and paralyzing gaze of the Medusa” (Adriana Valdés, Alfredo Jaar, Immagini tra culture, Art Nexus-42, Dicembre 1989).
The device diverts the gaze that falls into oblivion, which petrifies it and leads it back to the mental image, fresh, present, produced by the sounds that reactivate the natural mechanisms of memory conservation. This updating of memory allows, despite everything, despite the prevailing darkness, the possibility of having a light of hope. 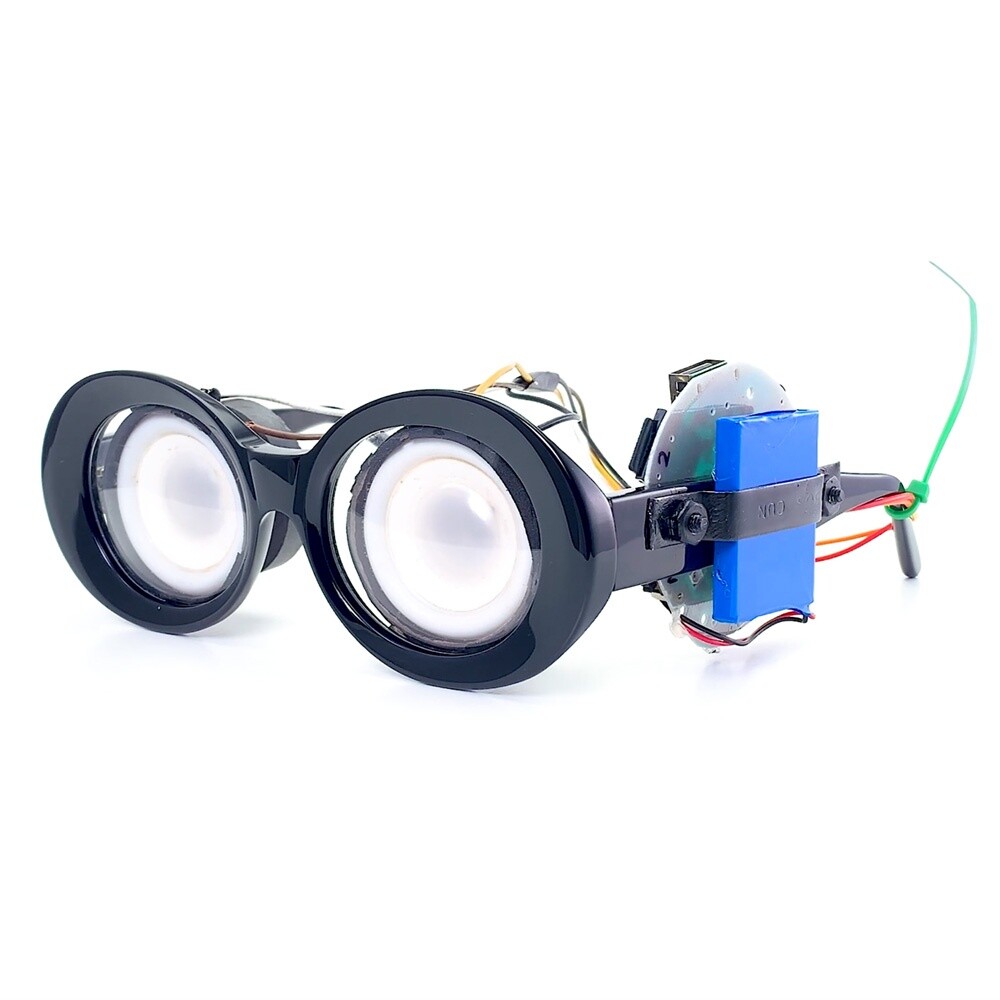 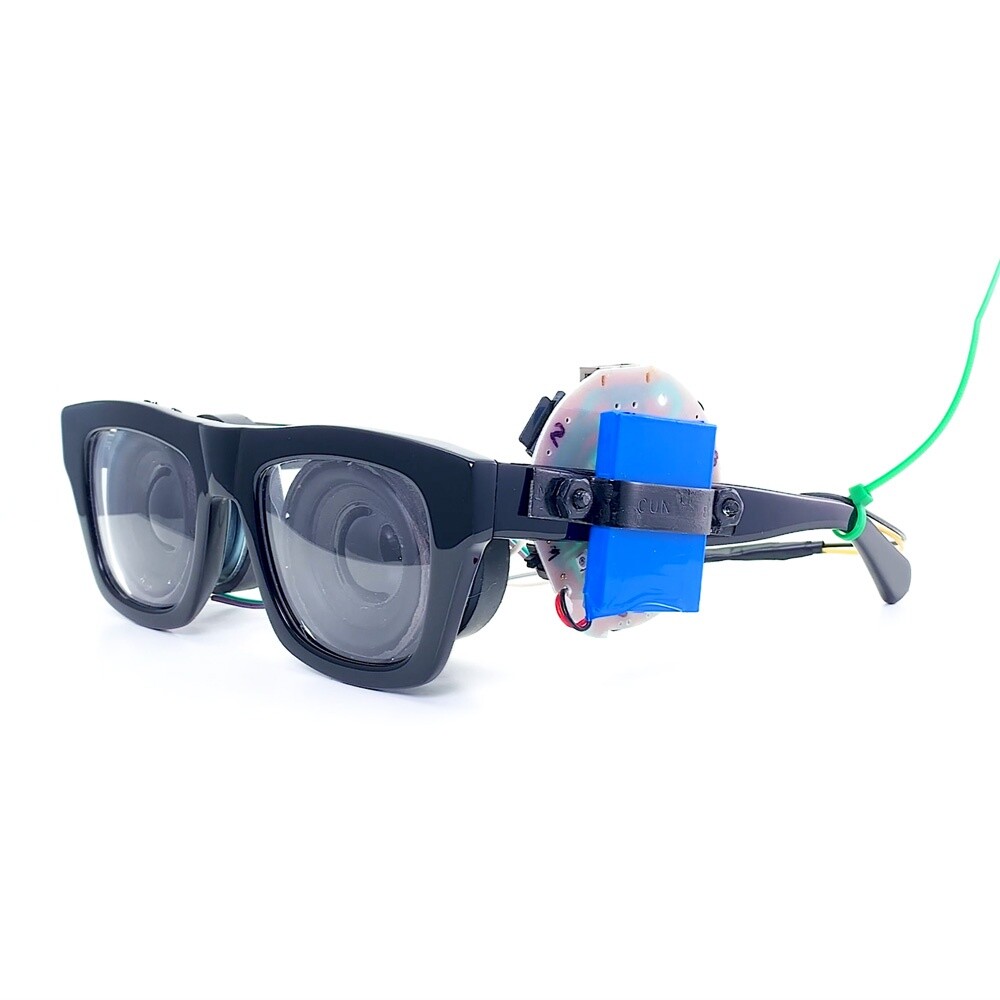 Giovanni Randazzo is a Colombian new media and visual artist, graduated from the University of Vincennes, Paris 8 (France), with a Master’s Degree in Contemporary Art and New Media from the same University. He is currently teaching the Audiovisual Installation course at the Art department of the Universidad de Los Andes. His research focuses on the use of new visual narratives, the incorporation of new technologies in art and the appropriation of cinematographic language in contemporary art.

Currently his work has focused on the development of multimedia projects, installations and video installations that often involve the use of new technologies and which generally arise from the intersection of art, science and technology. His works are the result of reflections on the perception of time, the impact of technology on our way of life, the fragility of humanity´s future as a consequence of man’s voracity in the use of natural resources. His artistic approach and research seek also to question the roll of power in the production of different kinds of violence and population displacement. His artistic practice has had a long-time development in the field of painting, sculpture, and photography. He has exhibited in galleries, institutions and independent spaces in France, Italy, Germany, Spain and Colombia and currently lives in Bogotá, Colombia.