My proposal for the “Moi Aussi…” project is inspired by the effects of the sting of a scorpion on the body. I suffered a scorpion sting a while ago and I remember that first it felt like my body was melting. The fluid penetrated my skin and made its way up to my head. My mind felt like swimming in a sea of ​​poisonous fluids while the adrenaline running through my veins made me feel anxious and see everything around me in a different kind of way. It was like getting in touch with my animal side: instinctive and unpredictable. A path opened with it and marked the beginning of the exploration, which made possible the development of this frame.

In the process of making it the scorpion that stung me got caught in the resin mold that shaped the legs, which I made from scratch. The transparency of the resin resembles the one of the fluid injected by the scorpion; its main function is to cause paralysis in its prey, something that I managed to reflect through the rigidity that the resin reaches once it dries. The frame, that I also intervened with resin, was thought as homage to the bizarre ways in which we see the world when our bodies are being inhabited by foreign substances: a reality that unravels its true plastic construction, thus revealing the true nature of the materials from which it is built.
Adriana Kanal 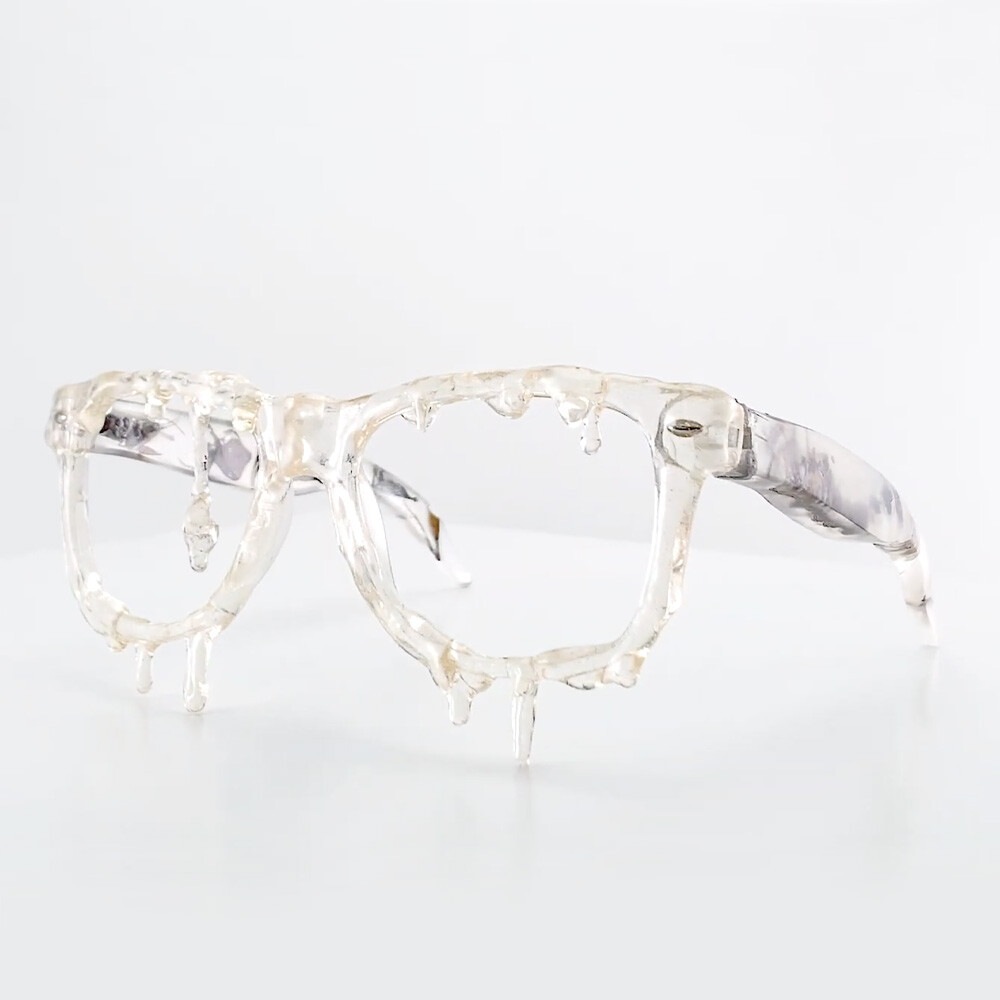 Adriana Kanal Fashion Designer of the San José Foundation in Bogota, Colombia. Graduated in 2015 with an outstanding thesis consisted of the stage costumes of Giacomo Puccini’s opera, Gianni Schicchi. Currently direct the production in my own independent design company, called KNL Performance Clothing. Intelligent, creative, hardworking, active and enterprising in the area of design and crafts. My current expectation is to expand my knowledge as a designer and costume designer learning from each position assigned to me, thus ensuring the best performance in them.

SAN JOSÉ FOUNDATION OF HIGHER EDUCATION
Fashion design
September 2015
Member and founder of the Fashion Laboratory and the newspaper of the Faculty.

Direction of styling for fashion photography

Winner of the O-Six award 2017 in Venice, Italy

Artistic residence in buenos aires in 2015, in the art house INDAJAUS

Presentation of the Exam for the Quality of Higher Education (ICFES Saber PRO) in December 2009, in which I obtained the best score of my Faculty.

Participation in all activities and parades conducted by the university from 2007 to 2009, presenting attire for women’s, men’s and children’s line, designed by me

Attendance to the fashion circle of Bogotá during the last 4 years.

Assistance to the conference for the analysis of Fall – Winter 2009-2010 runways of New York, Paris, London, Milan, made by the FASHION GROUP INTERNATIONAL in Bogotá. August 22, 2009

“Identity in Colombian fashion: the dilemma of the new talents” August 14, 15 and 16 of 2008, held in the square of artisans in Bogotá.

Currently and since 2015, direct the production in my own independent design company, called KNL Performance Clothing.

Alternatively, I work as a costume designer in stage productions such as fashion editorials or TV commercials.

Between the years 2012 and 2014 I have done works for several productions as:

The costume of two parade customs in the city of San Andrés island for the company Teatro Terra.

Fashionable makeup and Styling for the photographs of the producer Casa sin Fin.

Costumers and Art Assistants from the Home Center catalogs for Dmente Producciones.

During the years 2012 and 2013 I was part of the costume making team of the Colombian Opera, specialized in hats and wigs, during the seasons that include the titles: Manon de Puccini, Mozart’s Marriage of Figaro, La Boheme de Puccini and Wagner’s Turandot.

Since 2012 until now I have directed the costumes, makeup and props of the operatic productions of the Central University that include the titles Gianni Schicchi by Puccini, Mr. Bruschino by Rossini and several operatic galas with the staging of several composers.

During the last two and a half years, I have worked in my mini-entrepreneurship project as a designer and designer of various products including: accessories, bags, t-shirts, jackets, among other items with exclusive designs that are not mass produced.

During 2010, I worked as a teacher of Plastic Arts at the HAPPY DAYS COUNTRY KYNDERGARTEN, in the village of Fagua, municipality of Chia, Cundinamarca, Colombia. In that job I learned to communicate with children to practice teaching.

During the years 2010 and 2011 I participated in several university projects of continuous photography and fashion production.

In 2009, I was an image in the photographic project of the work “Casa Tomada” by the artist Rafael Gomezbarros, in which I proposed ideas in terms of costumes and photographic concept and lighting.